A sizable galleon cut through the waves with hardly a rise and fall of the bow. 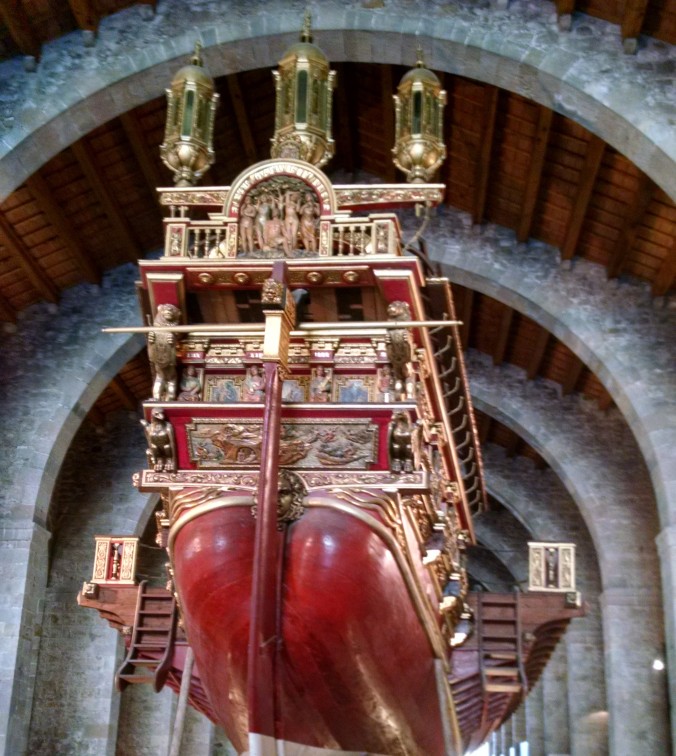 The Great Cabin below the poop was high enough to have windows that lightened it on the cloudless day. The crows nest had just reported that land was out of sight. After a long stretch in dry-dock for repairs, the ship was alone in the round, blue world.

The Captain had called an officers’ meeting. He sat at the head of the table in a dark suit. His white hand under the table toyed with the second-to-last golden button of his coat. He was a young man, with a trimmed blond beard. He licked his lips and glanced down the table at his officers. None of them had been harmed in the accident that had left them landlocked for so long, though they had nearly lost the ship.

First, the navigator, an old man who swung his jaw in and out. Last time, his guidance had ended in disaster, but he wasn’t worried. Just anxious to study the map and give the ship its course.

Next, the pilot, a man in his prime, with a shock of hair so red it seemed to ignite in the sunlight. He was cocky; only a few months before, he’d confidently steered them into the storm that had eventually handicapped them.

At the far end of the table was the surgeon. He was also calm; asleep, in fact.

The left side of the table was less serene. The cook stared at the wall above the pilot’s head. His elbow rested on the table, his shoulders hunched low, his chin on his hand. His thick fingers went up and down his lips.

The carpenter’s eyes shifted resentfully around the table. He’d barely recovered from the nightmare he and his ship had endured. He’d never found who to blame.

Last, the boatswain. He hadn’t ceased glaring since the Captain had boarded that morning.

The Captain swallowed. “Well,” he said, “it’s really too early to tell how things are going.”

“We should get back to our posts. I’ll call another meeting tomorrow… At least if there’s a problem…”

The boatswain leaned forward. “Captain?” he said firmly. “We’re under full sail.” His head tilted in his effort to keep his voice even. “Where are we going?”

The boatswain’s voice was caustic. “You might want to tell us. Because it looks like nothing’s changed from last time, and a few of us might object.”

The Captain’s gaze scanned the group before him. The surgeon slept on. Knuckles whitened against the table.

He took a breath and smiled. “We haven’t sunk yet.”

What is this? A story of misadventure? Of mutiny? No. It is the story of the unexamined life.

Everyone has a philosophy.

Say the word “philosophy”. Is it a familiar word? One that you fully understand? Likely not.

I, however, insist that everyone has one.

Your philosophy is the collection of rules by which you live your life. You have gathered these rules by experience, trial and error, seeing the mistakes of others. In some ways, this philosophy makes you who you are.

This is how his life is like the ship in the story above. He has rules for all his parts individually, just as the navigator, the surgeon, and the cook all know what they should do. But if his parts do not work together, what he experiences is not life as a whole, but as a mash of parts, which is no life at all. The Captain must examine his goal and determine how each of the crew should act; if he doesn’t, it would be better if the ship never sailed.

“The unexamined life is not worth living.”

Socrates, an ancient Greek philosopher, was put on trial and found guilty of crimes against his city, Athens. The prosecutor suggested the penalty of death. Then Socrates stood. His audience hoped he would propose to “go away… and live quietly, without talking”. But he told him his belief that “the unexamined life is not worth living.” He would rather die than be forced to live as other men do, without trying to understand more. He considered the examined life, the life filled with order and wisdom, too dear to part with. And death, he reasoned afterward, was no parting.

Here Socrates gives the definition of a philosopher. A philosopher is one who cares about his philosophy. He is a “lover of wisdom”. To be wise is to have a habit of examination, of ordering one’s philosophy in conformity to everything seen and believed. He wishes to have the best philosophy there is: a philosophy fully examined and mended until it is a ship ready to put out into the deep.

A true philosophy is necessarily bound up with truth. It has three enemies. First is Disintegration. Second is Mistake. And third is the sugared glaze of Glamor. Naturally, there are three types of truth to combat them: Integrity, Knowledge, and the salt of True Happiness.

I’ve adapted a metaphor from C.S. Lewis’s book Mere Christianity. He focuses on morality rather than philosophy, but the proportions hold. Each of us has a philosophy, like the galleon in the story above. A ship has three types of health, which match up to our three types of philosophical truth.

First, a ship’s crew must be in order; our crews are the rules we discussed earlier and our parts, such as emotions, intellect, and will. If they work in their proper places, we have integrity. If, however, the captain is too weak, his officers won’t become the unity that makes a ship. The navigator won’t calculate a way to port, and he will refuse to tell the pilot his course. This is the lie of “disintegration”. Disintegration occurs when a part tries to act as a whole, with a goal apart from the goals of the whole. For example, a disintegrated man might wish to be just, but he still decides to sell a pirated movie. The greedy part of him ignores the justice that is desired by the whole and chooses something for itself.

Second, a ship must have an accurate idea of the seas it sails. Otherwise, it will be caught in a storm, scrape against an underwater reef, or smash against a fellow and be destroyed. In the same way, we must always check our rules against the truths found in the outside world. We can achieve this only through true knowledge. Absurd, if sometimes historically understandable, mistakes in philosophy arise due to a mistake about the workings of the world; one of Socrates’s predecessors famously stated, “The magnet is alive, for it moves.” If, on the other hand, we check our theories against truths in the workings of the world, we won’t crash.

Lastly, neither of these strengths will get our ships anywhere if they have nowhere to go. For now, let’s consider our goal to be “True Happiness”, a safe haven for our ship. The lie that is opposed to true happiness is “glamor”. Glamor is a lie because it makes things that are not true happiness sparkle. It is like sugar, which can overcome a bad taste, making even poison seem desirable. Instead of being fooled by this fake, sugary happiness, we must be willing to try the salt. Salt is known to bring out food’s true flavor. It will help us find true happiness, one that will fulfill all our needs and desires.

Lewis points out that if any of these strengths is lacking, the others are pointless. If the captain, navigator, and pilot don’t communicate, the ship will never escape the obstacles on the open sea. On the other hand, if the ship wanders into an obstacle and sinks, there’s nothing to communicate about. Life plunges to the depths without a fully integrated and true philosophy. And if we have no goal or a bad goal, we’ll end up far away from true happiness.

Understanding and fixing your philosophy is the beginning of happiness. In your examination, be sure to stay away from the lies we discussed. Strive for integrity and knowledge. Avoid false, sugary goals and seek true happiness. The Captain in the story above nearly lost everything. This is his second chance, and he hasn’t made any changes. The seas are unlikely to give him a third.

In my blog, I hope to explore my own philosophy, posing questions to myself and answering as best I may. By seeing what I believe and why—Why is the most important and oft-repeated question of the philosopher!—perhaps your own beliefs will be clarified.

Since philosophy touches on everything, this blog will touch on everything. We’ll see a little literature, a little politics; a lot of thought and a lot of practice. Life is a work-in-progress, and as long as we live, we learn. So philosophy is also a work in progress. Take everything with a grain of salt!

27 thoughts on “The Unexamined Life”