A few years ago, I wrote a letter to my friends who were single. It went something like this:

I know Valentine’s Day is past, but it took me all of that day and then some to think exactly what I wanted to say.

I was thinking: it’s a good thing I don’t have a man to love me in that special way; not yet. I would want him always to tell me why he loved me, so that I would know that I was good in some ways. But I wouldn’t ask him to, because that’s so needy. So I’d be stuck, you see?

But, I thought, I’ll remember this, and if I ever love someone in that special way, I would try to remember to tell him my love.

I realized, though, that’s what I ought to do to Jesus, to praise Him, tell Him that I love Him and why. He tells me; He answers my prayers, and when I need someone I can see, He sends His friends, all of you, to tell me.

And I decided to play that role. That’s what my card is for: to tell you I’m so grateful He has given you to me as a friend to love as He loves you. 🙂

Some of you are single, but many have probably forgotten the loneliness. Loneliness is a little like boredom; it is bad, but it can bear the best of fruit if you let it. It forces you to focus on your whole self, your desires and decisions.

St. Valentine was a bishop in third century Rome. Most people know the story; Emperor Claudius II wanted more soldiers in his army, and believed that Romans were unwilling to fight because of their attachment to their families. He banned engagement and marriage; if men were not tied to women in that way, nothing could prevent them from coming to war.

St. Valentine defied the emperor and performed marriages in secret. He was discovered, beaten with a club, and beheaded.

Can you imagine that picture on a Valentine’s Day card?

What did Valentine die for? Common wisdom states that “Love isn’t a feeling; it’s a decision.” This means that love lies in willing someone’s good rather than in the affection you feel for them. I would say, however, that there’s more to love than a simple decision. Let’s start with feeling.

Shakespeare’s memorable declaration of love in As You Like It features a foursome. In Act V, Scene 2, the shepherd Silvius speaks of love:

What good is this tempestuous feeling? The answer is in the next few lines. Each character names the one for whom he or she pines. “And so am I for Phoebe!” “And I for Ganymede!” “And I for Rosalind!” “And I… for no woman.”

The good of this feeling is its individuality. It is to feel for them in a special way, a way that you don’t feel about anyone else. To “decide to love” in a general way is no good if you can’t love individual people; to will the good of mankind and yet be unable to smile at people you pass on the street is not love.

As Silvius opines, however, love isn’t only a feeling. A feeling that is not backed by reason and will is a feeling that will fade.

Today is a good day to slow down and express love in words. Feelings without words can be very unhelpful creatures. Upon finding his true love, all Prince Derek can say is, “You’re beautiful! You’re all I’ve ever wanted!”

She replies, “Thank you. But what else? Is beauty all that matters to you?” 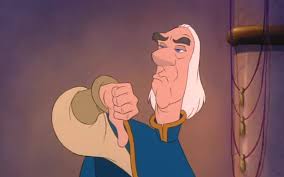 Why are words so important? Feelings without expression are feelings that reason cannot vouch for. Sometimes they are the truest, transcendent emotions (as they are in Derek’s case), which makes them difficult for reason to grasp. But more often reason doesn’t bother to untangle them; it judges that they will disappear and are not worth the trouble.

This is why Odette demands words. In the end, Derek is able to say what he means: “For longer than forever.”

To speak the love is to prove that reason supports the feeling.

St. Valentine’s story doesn’t end, “They lived happily ever after.” What is this? A love story that finishes in torture and death?

Yes. The love of the couples for each other isn’t the focus. Rather, this story is about Valentine’s love for the couples. His decision, beyond feeling and reason, to show love in the face of evil.

This is where the will must strengthen emotion. The feeling of love isn’t always enough to carry us through the “for worse” times in our lives. But to will death rather than forsake the beloved, to choose the bad for yourself in order to gain the good for someone else… That’s a love that must be chosen, not just reasoned to, and not just felt.

Christ says, “Greater love has no man than this, that he lay down his life for his friends.” While this, too, emphasizes the will to love over feeling and reason, I would argue that all three are present. He speaks of the man’s friends, philon: those for whom he has affection. Reason supports the love He speaks of and gives Him the words to express it.

All three pieces together are this greatest of loves. Reason frees the will, and affection chooses particular recipients of the love. It is an integrated love, one that combines every part of us into a whole that is greater than ourselves.

May you have a blessed Valentine’s Day!